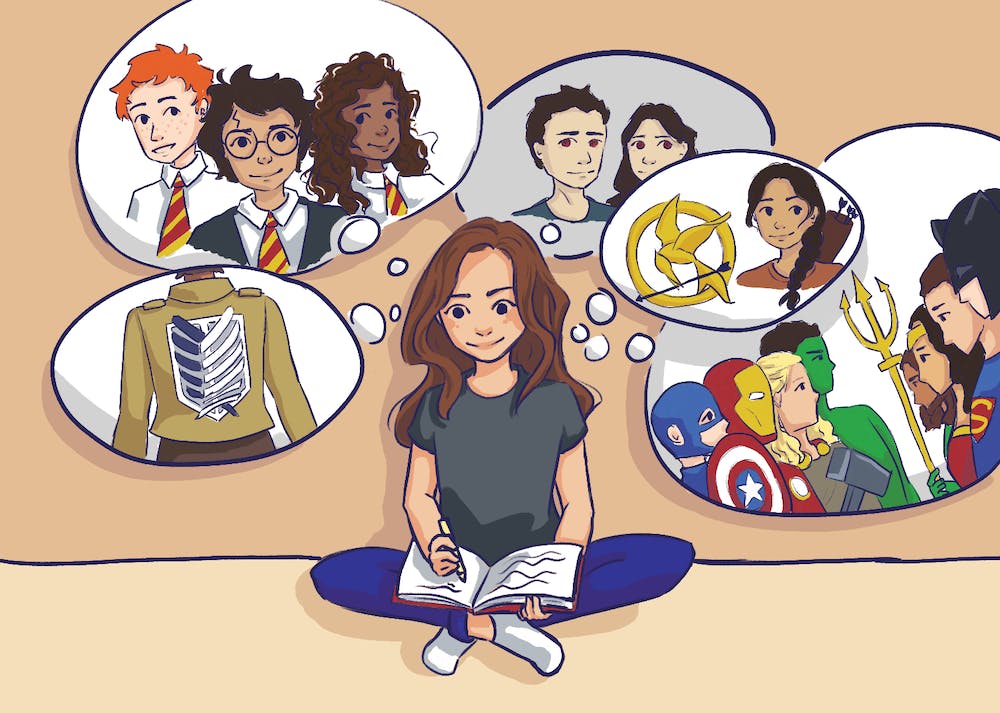 People who admire any character from television shows, web series, movies, or other sorts of media often want more, which is where fan fiction comes in. Now that you’ve seen every episode of Breaking Bad, you might be wondering what will happen to Jesse Pinkman. Maybe you’ve finished the latest episode of The Big Bang Theory and are eager to know whether or not Howard gets his doctorate. This is how fanfiction sites were invented.

Fan fiction, as the name suggests, is a story produced by fans about characters from works of fiction such as television shows, web series, plays, anime, video games, and other media. The creator of fan fiction has the freedom to invent settings, stories, and characters. Because it lets them spend more time with their favourite characters, this literary exercise has grown increasingly popular.

What is a FanFiction?

As a dedicated viewer, it’s hard to accept that your favourite film or TV series has come to an end. But it only makes fans hungry for more, so they came up with Fanfiction as a way to keep their favourite fictional pop culture figures around indefinitely.

Many fanfiction websites offer literary fanfiction pieces where characters like Mr. Spock and Leonard Hoffstad embark on exciting new adventures for the reader.

Authors of fan fiction have the freedom to tell their own stories. Characters from multiple canons or media franchises often collide in Fanfiction. This is due to the fact that there is a restriction, and the success of the piece ultimately rests on the author’s infinite creativity.

Authors of fanfiction are free to do whatever they want to the plot of a movie, even adding in new characters and situations that don’t make any sense.

Here are the best Fanfiction sites of all time that you should visit if you enjoy reading FanFiction works. Here you can find a list of all of major fanfictions sites, so you can easily locate the ones you like best. 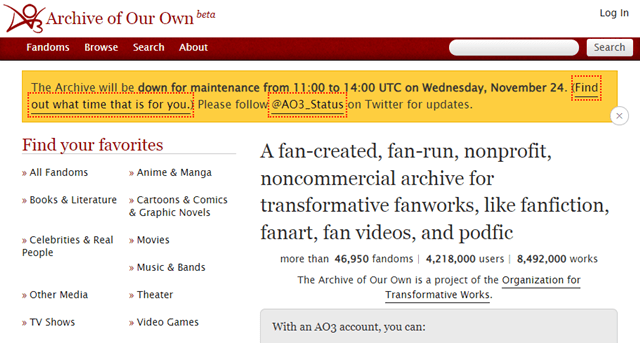 Fanfiction from movies, TV shows, theatre, video games, cartoons, celebrities, and manga can all be found in AO3, making it one of the largest libraries of its kind. It has more than 18,000 Harry Potter fanfiction stories, and you can find fanfiction on just about any topic you can think of.

With AO3, you can utilise the site’s advanced search features to find the perfect fanfiction to read based on a variety of criteria, including topic, tags, author, crossovers, and more.

You can let your creative juices flow on FanFiction.net, which hosts thousands of stories based on beloved media properties like Beyblade, Dragon Ball Z, Naruto, Star Wars, and Thor. The user-friendly layout of this fanfiction list will ensure that you have no trouble finding what you’re looking for.

Writing fan fiction or taking part in an online forum are also great ways to have your voice heard. Manga, anime, movies, books, plays, and animated cartoons are all included in FanFiction.net.

Commaful may be confusing at first, but it’s well worth your time. You can read a variety of short stories for free on one of the most visited multimedia fanfiction websites. The design of this website is purposefully meant to keep you on it for longer thanks to its enticing colour scheme and beautiful photography.

The Commaful content model, which is based on short stories, is also effective at getting readers to check out more from the site. You may find a tonne of stories by searching for them in a certain genre or under the umbrella of popular fandom like Naruto, Harry Potter, or Game of Thrones. To add to that, Commaful makes it simple to publish your own stories. 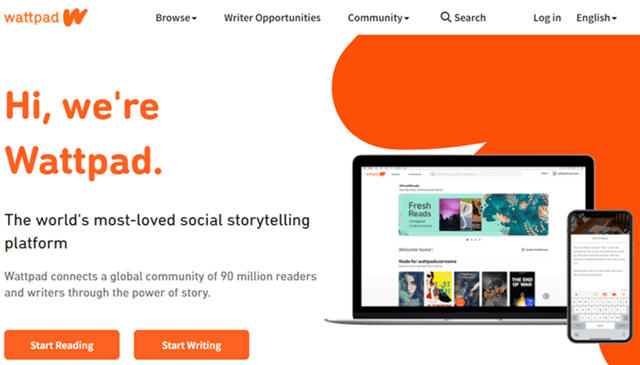 There are more than 90 million monthly active users on Wattpad, making it one of the most popular fanfiction websites. The website provides a seemingly endless abyss of fanfiction works in genres as diverse as horror, fantasy, and YA fiction.

There is a large and prominent literary community that has produced countless books and stories, both original and Fanfiction. I can guarantee that your time spent on Wattpad will not be wasted in boredom. 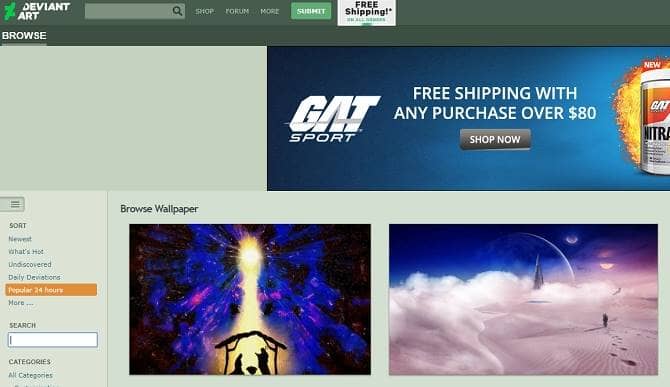 Among the best-looking websites out there, DeviantArt has gained notoriety for its fan-created visual art, photography, and video. Among the world’s largest populations, it ranks the highest.

You can discover thousands of hits for any fanfiction you’re looking for on DeviantArt. Obviously, you need some familiarity with fanfiction in order to get about on DeviantArt, but it’s well worth the effort.

The popular fanfiction website, Quotev features stories from a wide range of genres. Poetry, short stories, and novels written by the users themselves can be uploaded. You may find a wide variety of fanfiction on Quotev, in a number of different categories. The simple design of Quotev means that it meets the needs of both writers and readers.

It is a fanfiction website that mostly features Asian settings, characters, and plots. AsianFanfics is the place to go if you want to read and write fanfiction based on Asian culture.

Although it is an Asian portal, it hosts over 220,000 fanfictions. With over 400,000 people, it is one of the largest fanfiction communities in Asia.

It has certain features that you’d expect to find on a blog, but it also has some extra features. Users who have registered can engage in group discussions, share and seek feedback on reviews, make requests for fan fiction, and publish their own works. 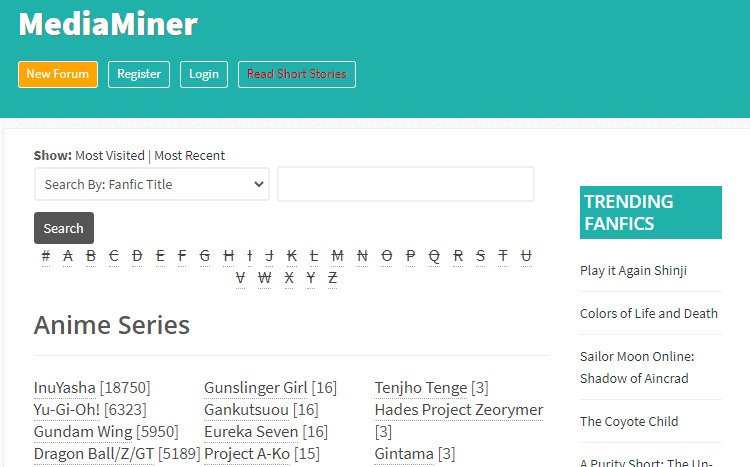 The popular website MediaMiner also has access to high-quality fanfiction. It is a great place to find anime and fan art. Showcase your writing abilities on the site if you are a writer.

The website has a large amount of information, but everything is easy to find. Three distinct categories delineate the material they offer: Anime Series, Non-Anime Series, and Other Series.

In addition to searching by genre, you can look for a specific author by entering their name or email address. This fanfiction site has an attractive and easy to use interface.

In spite of the fact that Tumblr is not designed as a place to read fanfiction, you can take advantage of the site’s massive audience to spread the word about your fanfiction novels or short stories. Quick success is possible for those who fully exploit the platform’s features.

When it comes to reaching a large audience, Tumblr has always been at the top of the list. The fact that they would also have a large fanfiction library is, therefore, not surprising. The only challenging part is learning which tags you should be following.

When searching for new content on Tumblr, the tag “fanfiction” or “fanfic” is your best bet. Most fanfiction writers will use these tags when uploading their stories online. 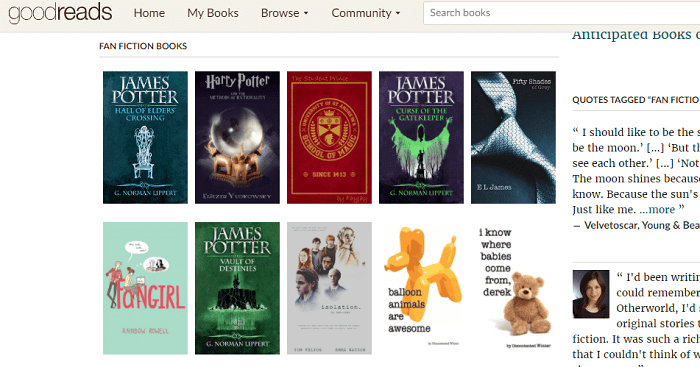 GoodReads is another one of these fanfiction sites where you could find great fanfiction to read, albeit it does not have as much as some of the others. There may only be 35,000 works of fanfiction on GoodReads, but every one of them is excellent.

The welcoming and fascinating nature of GoodReads’ user community is one of the site’s defining features. So, if you’re a writer, you can get honest, insightful critical reviews from your peers and experts.

In their fanfiction section, the most read stories are based on the books Naruto, Harry Potter, Twilight, and The Lord of the Rings. In light of this, GoodReads is a viable option if you are a writer or just enjoy reading high-quality fanfiction.

Most Popular Niches of Fiction

Based on user feedback, here is the ultimate list of the best FanFiction sites on the web. We couldn’t possibly list every single fanfiction website out there, so we just included the top ones.