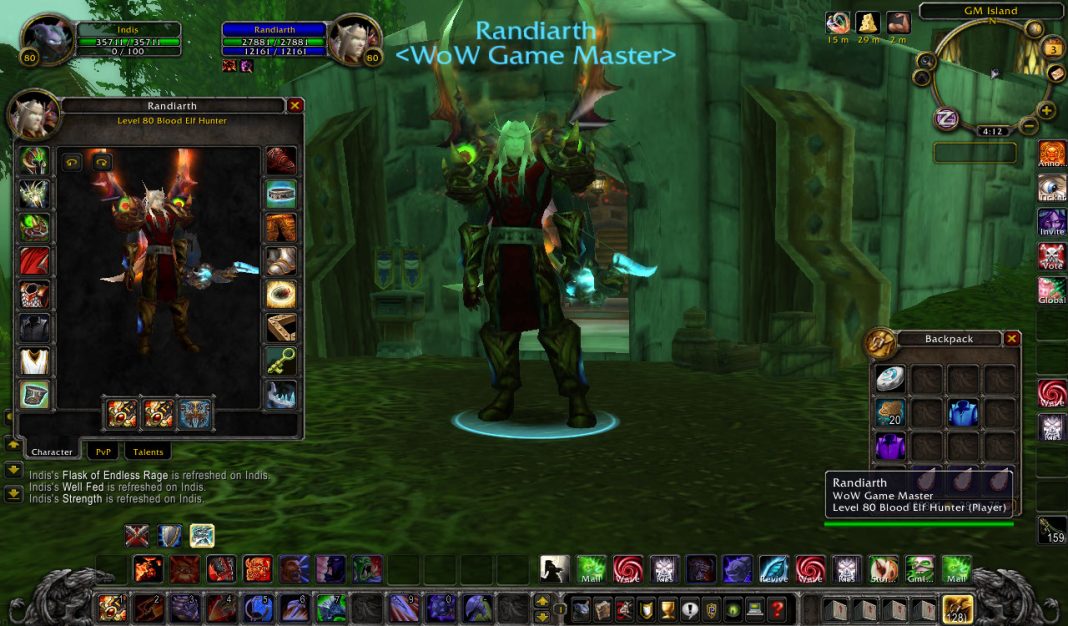 Better gameplay is possible through a World of Warcraft private server. All of your gaming requirements can be met by its robust hardware, stable server, and consistent availability.

If you host the game yourself or play it on an unofficial server, you run the risk of experiencing lag, security issues, and other problems that aren’t present when using a professional service. Players know how frustrating it is when something like this happens to them. When this happens, you stop caring about the game, which can dampen your enjoyment. Hence, a private World of Warcraft server is a logical step for any dedicated player.

Let’s set some ground rules and look into the best World of Warcraft private server for nonstop action.

The World of Warcraft

Multiplayer online role-playing video game World of Warcraft (WoW) was released in 2004 by Blizzard Entertainment. Hundreds of thousands of online players can use it because it works with both macOS and Microsoft Windows.

To play World of Warcraft, you’ll need to make a custom character, then move that character around the game’s open world from either a third- or first-person perspective. You can investigate the world, weapons, enemies, etc., talk to NPCs, and accomplish quests. In order to complete missions, explore dungeons, and engage in player versus player combat, you’ll have to collaborate with other players. You are free to perform without any other players present.

One of the main draws of World of Warcraft is the opportunity to level up your character and acquire new abilities as you play. You can buy and sell items, as well as upgrade your arsenal, with the game’s virtual currency. With its launch in 2004, World of Warcraft immediately achieved commercial success. It shot to prominence as a top MMO RPG in no time. Around 12 million people were subscribed to it in 2010.

In the context of online role-playing games, “World of Warcraft private server” refers to a server that runs the game in an offline environment. There will be less lag, less stress, and more fun if you rent this server to play on. Also, your safety in online play is ensured.

You can host World of Warcraft on your own, but a private server has many advantages. Their hardware and infrastructure are solid, and they cover the world. So, the multiplayer game will run smoothly and without glitches for you and your friends no matter where you are.

If you’re looking for a reliable private server to play World of Warcraft on, here are a few suggestions.

For over six years, WoW-Mania has provided reliable and high-quality servers for the game. Game servers and services are of the highest quality to ensure player satisfaction. A stable and bug-free private server, WoW-Mania is a good choice. The hardware is top-notch, and it also has exclusive content made just for you. The platform’s design, development, and implementation by trained professionals is geared toward giving you the best possible gaming experience.

WoW-Mania is home to an enthusiastic and hardworking crew that is always working to improve the service and keep the game running smoothly for players.

With players hailing from more than 53 different countries, the community is alive and kicking. In order to make WoW-Mania a better place for everyone, you should all join up. You can join their forum or Discord server to talk to other players.

Story expansion “Mysteries of Azeroth” was created by the Turtle WoW team, which drew inspiration from Blizzard Entertainment’s Warcraft Universe. If you’d rather spend your time exploring the Azeroth of Vanilla World of Warcraft than fighting the stellar battle against the Burning Legion, this expansion gives you that option.

There’s more from the Warcraft universe in this game. When you play World of Warcraft with Turtle WoW, you’ll reach new heights in terms of fun and excitement. In addition to new zones, raids, and dungeons, Turtle World of Warcraft includes two new races:

It is enjoyable for both novices and seasoned players. You will encounter new locales, characters, and groups. Also, you can acquire bonuses while enjoying the outdoors with a tent, campfire, and fishing boat. You can also collect new seeds or cultivate your own crops to earn rewards.

Additionally, customize the skin and paint colors, hair color, etc. to make your character more unique. The interface has been enhanced with an expanded quest log, minimap to locate the battleground, built-in add-ons, toggle XP gain on the player’s portrait, and more.

WoW Circle, one of the most well-known private server providers for World of Warcraft, enables you to play the game continuously with its robust features and hardware. More than 24,000 users have played World of Warcraft on this server.

It grants access to a variety of content, including Legion 7.3.5, Mists of Pandaria 5.4.89, WotLK 3.35, and Cataclysm 4.3.4. All of the games you play on WoW Circle will provide you with the same sense of familiarity as the official Blizzard WoW servers.

While playing the games, a 30 second delay indicator is consistently displayed. As the hardware will be hosted in Central Europe, it offers multiple fun rates (x100, x5, x4, and x1) and lower ping. Additionally, you will receive 10 game worlds that can accommodate hundreds of active players. You may purchase equipment, levels, characters, and gold. It has a client size of 49 GB and accepts multinational players.

It frequently updates the game worlds, continuously searches for and fixes bugs, and does so on an ongoing basis. To begin using this server, you must download and install the game client, register as a new user and log in, and then begin gameplay. If you have any questions regarding installation, connection, updates, bug fixes, or gaming, you can visit the forum. In addition, it is possible to provide helpful suggestions for enhancing the tool.

Stormforge allows players to experience the adventures of Warcraft and discover new lands covered in snow, rain, fog, and mist. It will help you defeat enemies attempting to upset the equilibrium, and you can carve your own path through their blood.

You can transfer all of your characters and roles from Stormforge to Fordring. This allows you to continue your journey without having to begin from scratch. With the same characters, you can still progress through snow-covered landscapes.

In addition, Stormforge is constantly working to improve the platform. You can join their Discord community to share ideas and stories, discuss strategies, and locate a gaming partner.

Unlimited WoW is an additional private WoW server that has been in operation for five years. It supports stable connectivity with delays of concern. The team strives to continuously update the game, introduce new features, and fix bugs and errors so that players have the best experience possible.

Unlimited World of Warcraft enables you to easily create characters with instant level 255 and spin them in various locations. This game offers a variety of equipment, weapons, professions, and NPCs to help players maximize their experience. In addition, you can begin the game at level 255 and still enjoy it.

Additionally, you have access to over 80,000 unique items and races, with each race having access to all available classes. Unlimited World of Warcraft provides PvE, PvP, and custom servers. This game’s client is 19 GB in size, including 63 MB for patches. It can hold 1,000 to 2,000 players and has a fun rate of x9999. In addition, this game supports the Wrath of the Lich King expansion.

WoW Freakz is renowned for its Buzz-like game server environment. Many players consider it an alternative to the original WoW server for this reason. It has been around for years and has a large player base from around the world.

The game is multilingual, supporting both English and Spanish. This game’s distinctive feature is the ability to transfer characters from other servers. This feature is uncommon, and the best part is that it’s free. Its content, including dungeons, cut scenes, etc., is properly scripted.

In addition, the fun rate can be specified during account creation. It is also possible in later stages. WoW Freakz offers a reliable server as well as a variety of add-ons to enhance your gaming experience. It offers two server types, Buzzlike and PvE, and its client is 48 GB in size.

Additionally, WoW Freakz supports up to 7,500 players and enjoyment rates ranging from x1 to x15. It can be expanded to Legion and allows you to purchase items, such as level, equipment, and vanity items. RetroWow is the official Vanilla server for World of Warcraft. It only supports English and the original Warcraft game. This server provides cross-faction battlegrounds, tokens for PvP, and scripted instances. You can quickly reach level 60 by spending a few dollars. In addition, it offers both PvP and PvE servers, and its client size is 4.9 GB, which is very small compared to other servers.

RetroWoW supports raid/attack requests and a population between 100 and 500 players. Included in the supported fun rates is x4, and the game can be expanded to WoW Classic Vanilla. In addition, you can purchase items such as armor, enchantments, and gold.

The Esense WoW private server is an excellent WoW server that will provide you with a quality gaming experience. It has been online since 2022 and offers both PvE and PvP servers. This game server can accommodate between 1 to 100 players. Additionally, its realm rate is instant and Spanish is supported.

Warmane is a WoW private server that was released in 2019 and is designed to provide exciting gameplay. It is one of the largest servers, accommodating up to 20,000 players across multiple realms. Its most populous realm is WotLK or Icecrown, with 12,000 players and a queue between 500 and 1,000 long.

Its client size is 8 GB, which is light compared to many other available WoW private servers. Additionally, it supports multinational firms. In terms of aesthetics, the Warmane private server is Blizzlike, simulating the experience of playing in the original WoW server environment.

The PvE mode on the server has been meticulously implemented by Warmane in terms of boss fights, scripts, and loop drops. Its PvP mode is also decent, but the gameplay heavily depends on individual players.

To begin playing the game, you can choose the expansion and install the game client directly from the Warmane website. Warmane routinely updates the server with new capabilities and bug fixes. It also seeks to balance the game’s power. To accomplish this, 50% of the world’s gold and inactive characters were removed.

In addition, Warmane organizes tournaments on the server and awards cash prizes to the winners. You can win $5,000 if you finish first in the server PvP 3v3 competition.

The demand for Warcraft-themed video games is increasing. This is why you may encounter numerous new games with exciting gameplay, characters, environments, weapons, etc.

While it is possible to play the game on any server, acquiring a professional World of Warcraft private server will provide numerous advantages. You will be able to play games with greater availability and fewer interruptions regardless of your location. Choose the best WoW private server according to your preferences, and begin playing.